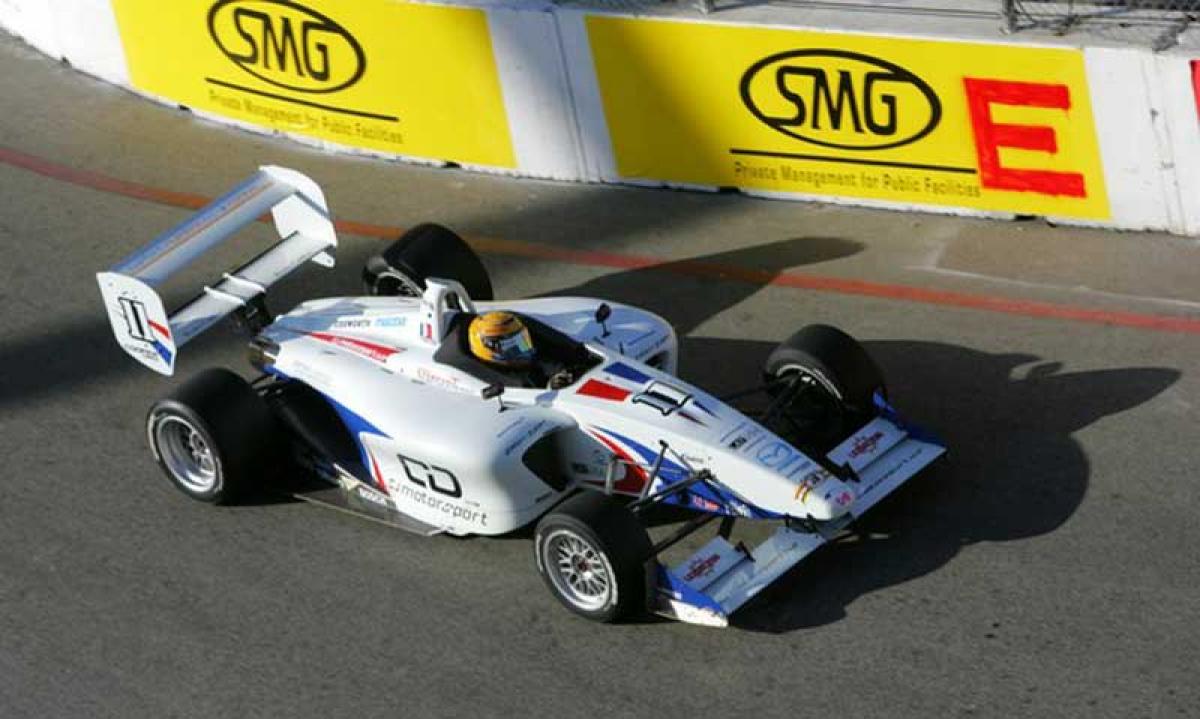 Perera started from the pole position and got away cleanly when the lights went out to move into the lead. The Condor Motorsports driver was in control of the race throughout, but Brazilian Raphael Matos (#6 ProWorks) managed to close the gap to less than one second in the final laps of the race. However, Perera’s lead was never seriously challenged and he went on to win by 0.676 seconds over Matos. Perera’s previous two victories came at Mont-Tremblant and Toronto.

It was Perera’s eighth consecutive podium result. He closed out the year as the only driver in the series to finish every race inside the top-five positions, becoming the first driver since Patrick Carpentier in his championship-winning season of 1996 to accomplish that feat. Perera is the 2007 Champ Car Atlantic Rookie of the Year and finished second overall in the final championship standings.

After starting a season-worst ninth, Matos got a great start and immediately began his charge toward the front of the field. Matos spent the early stages of the race battling Carl Skerlong (#24 King Taco/USRT) and Alan Sciuto (#20 WS Deans/The Room Store) for second place, but eventually settled into the position and went on to pick up his ninth podium result of the season to cap his championship-winning campaign. Matos will be honored as the 2007 Champ Car Atlantic champion, and pick up his $2 million prize toward a ride in the 2008 Champ Car World Series, during the Champ Car Atlantic Championship Awards Banquet at The American Club in Kohler, Wis. on Sunday night. Matos beat Perera to the championship by 31 points, 341-310.

Skerlong filled out the podium with a third-place run. It was Skerlong’s best result since a second-place performance in Round 3 at Houston in April and was his fourth top-10 result of the season. The result allowed Skerlong to leap from 14th to 10th in the final championship standings to close out his rookie campaign.

Jonathan Bomarito (#23 Miracle Sealants/Konica Minolta/Dynacor) finished out his 2007 campaign with a fourth-place result. It was Bomarito’s third consecutive top-four result, a run that included his first victory of the season two weeks ago in the San Jose Grand Prix. It was also Bomarito’s seventh top-four result in 12 races and enabled him to secure fifth in the final championship standings.

Italian driver Giacomo Ricci (#18 Banca Italease/Gioco del Lotto/Global Pesca/Abbey Resort) finished out his rookie Atlantic campaign with a fifth-place result. It was Ricci’s sixth top-six result in the past seven races and was his seventh top-six performance of the season overall. He finished sixth in the final point standings.

Kevin Lacroix (#10 Uni-Select) finished sixth for his best result since winning Race #2 of the Mazda Grand Prix of Portland doubleheader in June. Immediately following the race, it was announced that Lacroix will join Walker Racing for the 2008 Champ Car Atlantic campaign.

Canadian Robert Wickens (#3 Red Bull/INDECK) came home seventh and wrapped-up third place in the final championship standings. Wickens finished one position ahead of his Red Bull Team Forsythe teammate, John Edwards (#7 Red Bull/INDECK), who started second but fell back in the field in the early stages of the race due to an off-course excursion.

J.R. Hildebrand (#36 Nuclear Clean Air Energy) finished ninth to close out his rookie season in Atlantic with Newman Wachs Racing. Hildebrand started 21st and earned the bonus championship point for improving the most positions in the race. Englishman Ryan Lewis (#15 NCPI Solutions/Insport) rounded out the top 10.

· After opening the season with seven consecutive top-seven results, Canadian James Hinchcliffe (#9 NOCO/ProWorks) finished ninth or worse in four of the last five races to wrap-up the season, including a 14th-place result in the Generac Grand Prix. Nevertheless, Hinchcliffe still finished fourth in the championship.

· Justin Sofio (#26 RLM Investments/Stone Brewing/SAECO), who came into the weekend in 10th place in the championship standings, finished 15th in the Generac Grand Prix. The result dropped him to 11th in the final points.

Quotes from the top-three finishers in the Generac Grand Prix follow below:

FRANCK PERERA (#11 CJ Motorsport/Everflux/Perfect Nutrition) of Condor Motorsports: “It was a great race. It’s really nice to have a perfect weekend like that, especially in the end after losing an opportunity to win the championship, but Sierra (Sierra Enterprises) did a great job and Rafa (Matos) too with the second year of experience. The race was tough, because I had a technical problem in the end with the car, and it was difficult to keep the car up there, but it’s great. I want to thank Condor Motorsports. They did a good job to make sure I can fight with a big team like Sierra. I also want to thank Everflux and for sure, CJ Motorsport, for giving me the chance to continue my career in America. I hope I showed enough to be in Champ Car next year. I also need to thank my family, also, for being here again.”

RAPHAEL MATOS (#6 ProWorks) of Sierra Sierra Enterprises: “Definitely, it was a difficult weekend for us. We had to recover from a really bad qualifying position, and we just didn’t know what the problem was with the car until the warm-up this morning. We certainly improved the car a lot in the warm-up. I knew that I had a car that could finish on the podium. It’s just very difficult to keep up with someone who has the same speed on this track, because of the lack of downforce. You lose all your downforce when you run close. I’m just very pleased for the team. The Sierra Sierra crew did an amazing job. My engineer, Lee Dykstra, Dave Empringham, my driving coach, and everyone has been working really close together. All the hard work we’ve been doing throughout the season is being paid off with the championship and a solid result in the finale. I’m very happy. Let’s celebrate tonight!”

CARL SKERLONG (#24 King Taco/USRT) of US RaceTronics: “The first three or four laps, I was usually in at least a two- to three-car battle. I had a few moments that were very, very close with Alan Sciuto and Rafa (Matos) coming up. It was definitely tough to hold on. It was very hard in the beginning of the race. I think that somewhat hurt us from being able to get the victory in the end. Ending third, it’s a lot better than where we’ve been for most of the season. I can’t complain. It’s a great way to end the season here. We definitely struggled at the beginning of this weekend. We had a good race in Houston, and then we’ve really been struggling since then. To go into next season on the podium is a great feeling.”